PAM8403 is really small in physical outline with a SOP-16 package. Having a miniature outline you could expect a moderate performance but that is absolutely not the case. Listening to the PAM8403 is a pleasant surprise. Evidently, PAM8403 is limited in power by the 5V supply (5.5V maximum). This allows for just below 2W in 8 Ohm.

But, even 1.8W is sufficient to drive ordinary 3-way speakers at normal listening sound levels. Evidently, 1.8W does not offer huge reserves when the sound level is increased and PAM8403 is not meant as the amplifier for your living room. At normal and slightly high sound levels the sound is clear and undistorted with a surprisingly present low-range bass. Actually, the bass ambitions become a small weakness of the chip if not restricted a little. The modest output power means that the deep bass limits the sound level at a point where the amplifier could else go further. Use of a 50Hz high-pass filter at the input would probably make a more harmonic amplifier with a higher general performance level. When the chip performs within its limits, you would expect it in blind test to be an amplifier of a higher cost and quality. A THD+N level of 0.15% is absolutely decent.

With a quiescent current of only 16mA at 5 Volt, 80mW are lost in the chip. This means that the PAM8403 can indeed be used without a heat-sink which is not realistic for many class D amplifier chips. PAM8403 is intended for mobile applications where only a moderate power level is needed. Such as for portable computers. The chip seems ideal for such purposes but may also be used for smaller radios and portable speakers where a surprisingly good sound can be achieved. For DIY use the chip has the important advantage of being sold in completed amplifier modules at a very low price. But, modifying the circuit is somewhat difficult because of the miniature size. However, just buying a couple for experiments and to realize how far less than 2W takes you is worth the modest price. 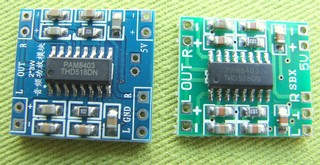 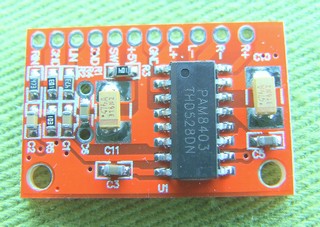 In test, one board would perform somewhat better than the other. A first board reached its power limits in a harmonic way for both channels while the second board distorted the bass in one channel somewhat before in the other channel. For a start it was believed that the asymmetry of the second board was due to a partly defect chip and the chip was accordingly changed through a tedious effort. But, while the second board had a fine and clear sound at low volume levels the asymmetry at higher levels remained. Study of the modules showed that they were from different production lots and with different PCB layouts. The difference in PCB layout may be the cause of the different performance. Due to the difficulty of investigation on the very tiny boards, only the best performing board was continued in test.

PAM8403 is intended to be used "filter-less" without an LC output filter. This is very important for production costs of commercial products but less important for DIY constructions. The small PAM8403 board was tried out without and with an LC output filter. Both options sounded fine and for most purposes the PAM8403 should be used without an LC output filter. The cost of an LC output filter is not worth the more marginal gains for such a low-cost chip, typically used for less demanding purposes.
The PAM8403 board was ultimately connected to two floor-type loudspeakers of the more demanding type (each with two 8 inch speaker units in push-pull coupling, two midrange speaker units and a treble dome; 8 Ohm). The PAM8403 could manage even so large loudspeakers but the deep bass left the impression of not being under full control. 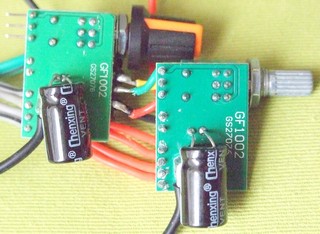 In conclusion, the PAM8403 chip is an amazingly good performer within its obvious limits and considering the very modest price. It seems ideal for mobile purposes and can even perform well with ordinary living-room loudspeakers. For DIY experiments it can bring a lot of fun with its very moderate cost - only modifying the miniature SMD modules and boards is somewhat delicate.
A lot of value for very little money.