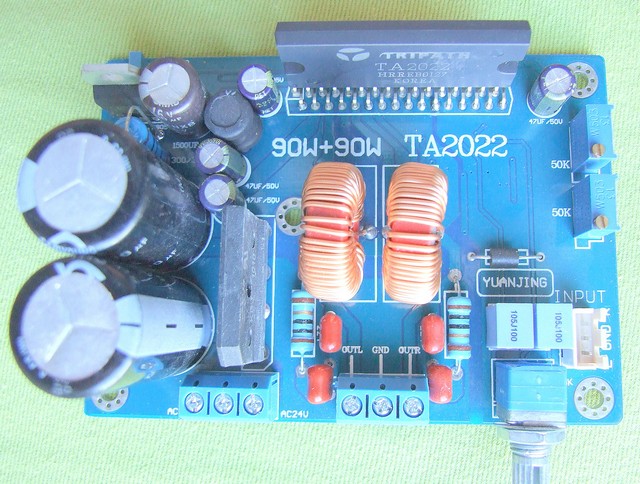 Tagged with the distinguished brand "Tripath" the TA2022 is a priori interesting because it is supplied in a package for DIL mounting and fixation on a heat-sink. Good for DIY use. As expected for a Tripath product, the THD is very low through use of class T modulation. A PWM modulation scheme using frequency variation as well.
Test of another Tripath class D amplifier, advertised as using the TK2050 chip-set, revealed that only the modulator chip was actually Tripath while the switch bridge was from STMicroelectronics. Not genuine Tripath.
The TA2022 is a single-chip class D amplifier for medium to high power output. Its main drawback is the rather extensive peripheral circuit and the need for a symmetrical supply if used in stereo mode. As an annoying detail, the over- and under-voltage detection circuit was found to be more sophisticated than smart.

The TA2022 board acquired for test was not at all expensive.
In order to test the board at arrival, a symmetrical +/-18V supply was connected and - absolutely nothing happened. Not as much as a "blob" in the test speakers. Quick measurements on the board showed that both the positive and negative supply voltages were present on the board supply rails but there was a problem with the 5V supply. Being inexpensive, return to the seller was not worth the cost. Own investigation of the problem would be necessary.

For a start, when investigating malfunction of electronics, it is clever to check the supply voltages and how they are distributed on the board. 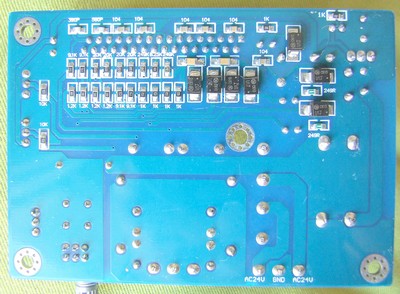 A first precarious discovery was the design of the 5V supply. Based on a 7805 regulator, that only accepts up to 25V at the input, a 300 Ohm drop-resistor was used between the positive supply rail and the input terminal of the 7805 regulator. Without a decoupling capacitor at the input of the 7805 for avoiding oscillation. On the output, however, 1000uF was connected for decoupling. This is far beyond what is recommended for the 7805 and may be a source of instability.
The 300 Ohm drop-resistor is not seen as a good idea. The 5V input of the TA2022 requires up to 60mA of current. The 7805 uses up to another 8mA quiescent current and 4mA is used for a "power ON" LED. Thus, in total 72mA (maximum) to be drawn through the drop-resistor. 72mA through 300 Ohm leaves a voltage drop of 21.6V. The 7805 requires as a minimum some 7V at the input for regulation. Thus, the minimum voltage at the positive supply rail becomes some 28.6V. The versatility of the TA2022 from a generous supply voltage range is lost. This 5V supply could be designed better. Linear regulators are preferred for low-power use because they are flexible in design and make no noise.
The 11V supply was initially implemented using the integrated Buck converter. Externally of the chip, the free-wheeling diode, an inductor and an output capacitor were arranged. The inductor was very small and no value or current rating was found on the inductor but 80mA does not require much. It is more the ripple level that could be a problem. It is always nice to be in control of the performance parameters.
As a replacement of the linear 5V supply anyway had to be made, it was tempting also to make a linear 11V supply and abandon the switching Buck converter. Replacement of both would leave control over the quality of the supply voltages. It also proved possible to use parts from these two new voltage regulators for clamping of over-voltage detection such that a wider supply voltage range could be used.

The basis for the design of the 5V and 11V supplies was the very cheap TL431 shunt regulator that can be used for many different purposes.

Further testing will be carried out when the new 5V/11V power supply has been implemented.