TDA7498E - Solid performance and a complete amplifier board. 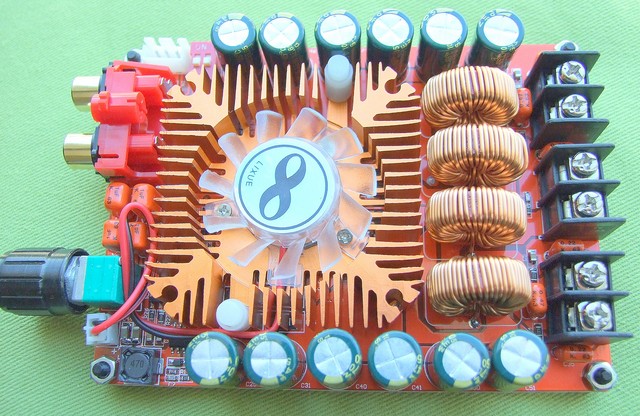 TDA7498E is the most powerful integrated class D amplifier from STMicroelectronics. It is obvious to assume that TDA7498E shares DNA with TDA7498. But, this seems not really to be the case. The TDA7498E allows for use of low impedance loudspeakers while the TDA7498 is intended for loudspeakers with higher impedance. Therefore, the TDA7498E can supply a higher output power. TDA7498E is specified to have a slightly better THD performance and most importantly a THD that rises less steep for frequencies in the mid range. TDA7498E has a 50% higher quiescent current compared to TDA7498. So, TDA9874 can be seen as a somewhat different product.

TDA7498E can be found in various amplifier boards. The board chosen for test here was one of the less expensive because experience has told that the board anyway needs to be modified before a good implementation is achieved. Such assumption was wrong in this case.
The amplifier board is designed with a rather large heat-sink in which a small fan is mounted. The idea of using a fan to cool the chip is a priori not appealing due to noise from the fan and reliability concerns. But, again the initial concern proved wrong. The board was tested with a 36V supply and the fan was not activated as the heat-sink temperature remained below 40 degrees, without casing, at an ordinary good output level. With a typical quiescent current of 60mA the power loss in the chip is good 2 Watt using a 36V supply. So, heating of the 7498E chip is less a problem than for some other class D chips. It is not improper that the fan may be activated if the amplifier board is used for more heavy duty purposes, such as party use. With a solid party sound level the fan will hardly be heard should it be activated. Hence, a proper thermal design.
The output filter chokes are of the toroidal type with a good diameter. A guess, with a current rating of some 7-8 Ampere. But, also heating of the chokes from core-losses at the switching frequency does not cause the chokes to become unpleasantly hot. Just below 40 degrees was measured on the chokes with a 36V supply. The output filter chokes need no replacement for good operation.
The output filter capacitors are of the foil type and need no replacement.
Even the terminals for power and loudspeakers are of a design for currents exceeding 10A, which is not always the standard for less costly amplifier boards.
The input terminals are of the RCA type and alternatively a PBC connector. Input coupling capacitors of the foil type are used as they offer better linearity than ceramic capacitors. Once more nothing to worry about.
Finally, the power supply decoupling capacitors: in total twelve 470uF/50V Sanyo high frequency capacitors put in parallel for low ESR and a total of good 5000uF. Absolutely a good on-board decoupling of the supply line for an inexpensive board. Of course, for permanent use more energy storage should be provided external of the board in order to ensure sufficient energy to handle powerful bass transients. The board was tried out with a 19V/90W power adapter, a 24V/120W power adapter and a 36V/180W power supply, all using 2x4700uF buffer capacitors external of the amplifier board. All worked well.
Between the power input terminals and the on-board decoupling capacitors two diodes, seemingly of the Schottky type, are connected in parallel. Such diodes provide a clever protection against wrong polarity of the supply voltage but reduce the effect of external decoupling capacitors a little. So, these two diodes were removed and replaced with solid wire connections. 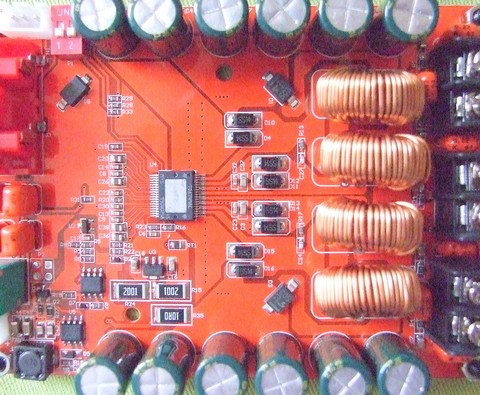 In order to replace the two power line diodes with solid wire connections the heat-sink had to be removed. This was easily done and revealed the TDA7498E in a tiny PowerSSO36 package. From a DIY perspective, very few DIY enthusiasts would like to touch such a small housing and also the point of choosing so tiny an outline when the chip has to be cooled by a heat-sink anyway is not obvious. At least NXP choses slightly larger packages for their chips that may be replaced manually. Anyway, the PCB layout seems well made and catch-diodes are used as protection on all four output terminals.

The TDA7498E amplifier board was tested with two- and three-way book-shelf loudspeakers and a set of floor-type loudspeakers (each equipped with two 8 inch push-pull bass units, double midrange units and a dome). All with 8 Ohm impedance. Initial test left the impression of a powerful, universal amplifier with undistorted sound and sufficient power to control heavy loudspeakers, even at very low bass frequencies. No real weaknesses in the performance were discovered. It is a convenience that only a single supply voltage is needed and not a symmetrical supply.
Only the DC offsets at the output terminals were found not to be impressive with 40mV and 20mV.

If you are looking for an inexpensive board that is initially well equipped and needs no modifications, to be used for all-round purposes including party, you will hardly be disappointed with this TDA7498E board.