TDA7850 - Impeccable sound intended for vehicles, why not also at home?

The TDA7850 is an audiophile quality, four channel amplifier intended for use in a vehicle. The THD performance is such that most of us cannot afford a car where this amplifier can be appreciated in full. But, if it is possible to supply such a quality at a modest price why not use it even if not necessary?

The TDA7850 operates from a single supply voltage which importantly reduces complexity.

A DIY kit was acquired for test of the TDA7850. The kit supplied all the components needed including the PCB and the heat-sink. We had to assemble the amplifier ourself. It was not particularly difficult to mount the board and it left the possibility to evaluate and adapt each component according to our needs. Only the PCB connectors that would be used were mounted. The electrolytic capacitors supplied in the kit were of a basic type. For one capacitor, with a value of 0.47uF and connected to pin 16 (marked "AC-GND"), the data-sheet does not describe the purpose. Therefore, it is difficult to determine the quality that is needed. The electrolytic capacitor provided was replaced with a 470nF foil capacitor to be sure.
A LED diode was included to indicate when the amplifier is connected to a supply voltage. A 10 Kohm resistor was supplied to control the current in the LED diode. But, 10 KOhm leaves only 1 mA in the LED diode with a supply voltage of 12V. For an 18V supply, around 1.5 mA. This was seen as insufficient and the resistor was replaced with a 4.7 KOhm resistor. 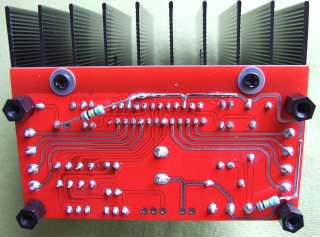 With the board assembled, a first test was carried out using a supply voltage of 12V. Nothing happened apart from that the power LED turned on.
Two inputs, the "MUTE" and the "STANDBY", had been left unused because it was assumed that unused as default would leave the amplifier to function. That assumption proved to be wrong. The data-sheet is not clear about if the inputs are active when pulled low (to GND) or high (to supply voltage). Only an experiment would clarify the use of these two inputs. Two 100 KOhm resistors were used to pull the inputs to the supply voltage rail (high). A new test showed that "MUTE" and "STANDBY" are active when pulled to ground. With the two inputs pulled high, the amplifier worked.

The supply voltage to the amplifier was increased to 16V from a supply with further 10000uF of storage capacitance at the output.
Initial test disclosed a clear and undistorted sound matching the expectations from the THD value of 0.006%. The deep bas was firm and well controlled and no hiss was noticed. The data-sheet states the TDA7850 to offer "Hi-Fi class distortion". That is not really fair to the TDA7850 as the Hi-Fi norm (DIN45500) is recalled to set the THD limit at 1%. Thus, the TDA7850 complies largely with the Hi-Fi requirements and can better be described as offering audiophile performance.
Only two channels were used in test (stereo).

With the 16V supply voltage and a slightly high sound level from two 8 Ohm floor speakers, the heat-sink became lukewarm but in no way unpleasantly hot. The board performed impeccably and can be recommended for low/medium power use where sound quality is the main criterion and class AB operation is accepted. In return, the board is versatile as it accepts loudspeaker impedances down to 2 Ohm.