TDA8932 - Our preference for DIY activities due to high performance and flexibility. 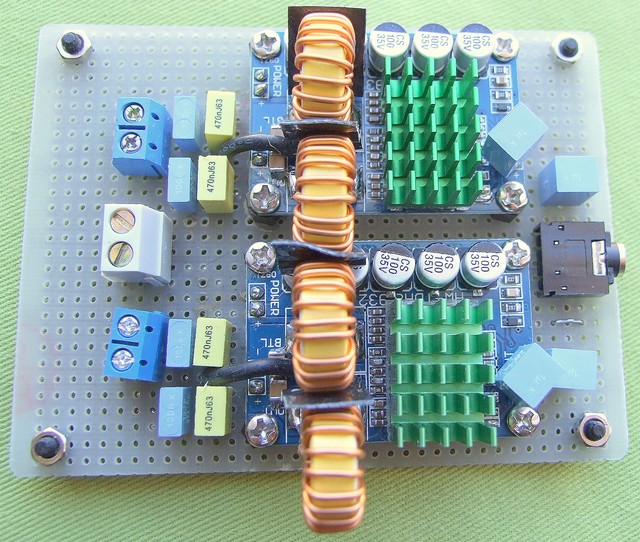 The TDA8932 became our favorite DIY class D amplifier chip for more reasons. It is inexpensive and a mono "BTL" version board is available at a very attractive price. This board can rather easily be modified according to DIY needs. The TDA8932 chip has a high performance level allowing more than 40 Watt output power in 8 Ohm. The THD value is stated to be as low as 0.007%. The chip package is a SO32 which is actually a big housing for a single-chip class D amplifier. You can change the chip if needed without being particularly skilled. The chip can easily be cooled with a heat-sink due to the package size and the location on an edge of the TDA8932 board. It operates from a single supply voltage in the range 10-36V. And, it has the protection offered on other class D amplifier chips.
No real disadvantages compared to other such class D chips were discovered.

The mono "BTL" board used is available from a number of suppliers and is, due to the price tag, limited in certain aspects.
The output filter chokes are of an elegant but probably insufficient type. The current rating of these chokes seems to be around 2A. That means 2A peak if the choke should not start saturating. Thus, around 1.3A RMS is the limit before saturation. 1.3 Ampere in 8 Ohm corresponds to 13.5 Watt output power. If a 4 Ohm loudspeaker is used the limit is around 7 watt. With the potential of the TDA8932 chip to handle currents up to 5A the output filter chokes clearly need replacement. But, it is rather easy.
The output filter capacitors are ordinary ceramic SMD capacitors and should be replaced with foil capacitors offering much better linearity.
For the input coupling capacitors the initial ceramic SMD capacitors should be replaced either by foil capacitors (a bit difficult) or at least high-voltage grade ceramic capacitors (SMD). High voltage grade ceramic capacitors have a better linearity than ordinary low voltage versions because the dielectric is stressed less.
The power-line decoupling capacitors need some attention as well. For such a small and cheap amplifier board, the full amount of energy storage needed to match the potential of the chip is not found on the board. Actually, the board is supplied with five 100uF/35V SMD capacitors of ordinary quality. The 35V rating just allows full chip operating voltage but provides no margins for the capacitor voltage. The five capacitors connected in parallel reduce the ESR. With the potential of the TDA8932 chip, a further 4700uF-15000uF should be added externally through low impedance wiring.
The last adaptation is of the chip cooling. The board is supplied without a heat-sink. Having a quiescent current of around 50mA, the idle power loss in the chip is 600mW with a 12V supply, 900mW with an 18V supply, 1.2W with a 24V supply and 1.6W with a 32V supply. For 12V operation, no heat-sink is really needed. For 18V operation, a small heat-sink may be glued on top of the chip housing which is easy because the housing is higher than the surrounding components. When the full potential of the chip is used with a 32V supply, it is recommended to glue an "L"-shaped aluminum profile on top of the chip housing. The other "L"-wing is then directed towards the edge of the board where it can be connected to a larger heat-sink.
With that you have an impeccable amplifier design. 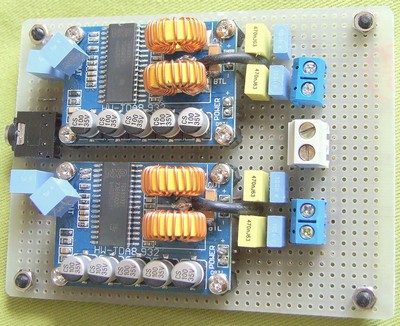 Toroidal output filter chokes with a 5A rating were tried as replacement of the initial chokes but the 5A chokes became somewhat hot from losses in the core at the switching frequency. Then, 7A rated chokes were tried and found to provide a minimum rating. Finally, chokes of 15uH/10A were inserted and performed very well with filter capacitances of 1uF. Across the output terminals, 100nF/1000V ceramic chip capacitors (SMD) were mounted to ensure an optimum suppression of the switching frequency.

In initial testing the TDA8932 performed very well. A THD level of 0.007% is close to the values presented by the best single-chip class D amplifiers on the market. The deep bass is well controlled and the midrange clear and undistorted. The output power with a 32V supply is fully sufficient for home use. All at an attractive price. For this reason the TDA8932 became our favorite for DIY use. 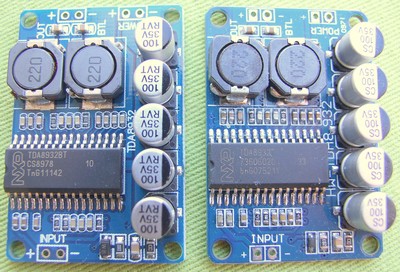