TDA8954 - Solid performance from a symmetrical supply and with a huge power potential. 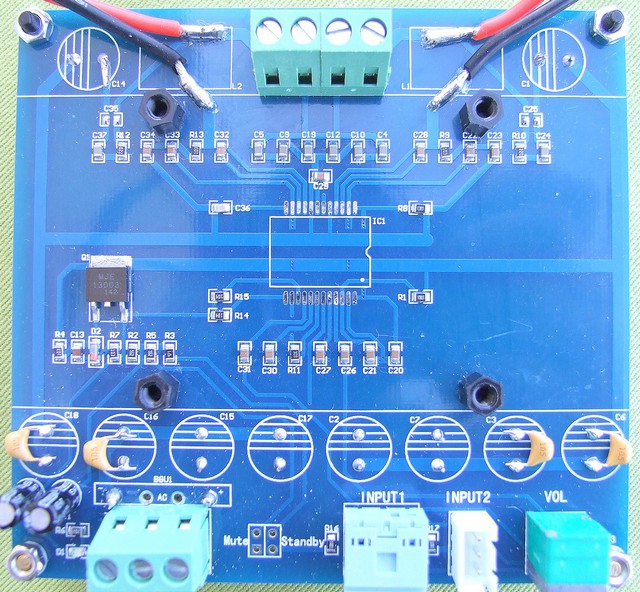 TDA8954 is at present the most powerful single chip class D amplifier from NXP. The maximum output power is specified to be 420 Watt mono in 8 Ohm or 2x210 Watt stereo in 4 Ohm. Indeed impressive but also daunting because the chip has a small, SMD mounted HSOP24-housing and the cooling of the chip will be critical. A DIL housing is available as on option with improved cooling.

The chip was for a start tested at moderate output power levels, in stereo (SE) configuration and with 8 Ohm loudspeakers. With a symmetrical power supply of around +/- 36V the output power is fully sufficient for home use. A slight disadvantage is that a symmetrical supply is needed for stereo operation. This makes the power supply construction more complex. The idle power loss is then from both the positive and the negative supply line. With a +/- 36V supply, around 50mA is drawn from the positive supply line and 65mA from the negative. Thus, with a symmetrical 36V supply good 4 Watt is lost in the chip in idle mode. For the board tested, the TDA8954 was initially equipped with a good size heat-sink. Even with such a size, the heat-sink became more than lukewarm and some 50 degrees Celsius were measured in idle mode. The heat-sink was later replaced with an even bigger one so the heat-sink remains only moderately warm.

The board acquired for test was of a rather cost-friendly type. This means that, while the chip is the same as for more expensive boards, savings have been made on the peripheral components. Actually, the original heat-sink was of a pretty serious type for a class D amplifier but was changed for an even bigger one.
The output filter used two toroidal cores of a decent size. However, as the amplifier is operated from a symmetrical supply the chokes are cycled in the magnetization curve with positive and negative bias and the core-losses become significant. A temperature of around 50 degrees Celsius was measured on the chokes in idle mode. As the temperature should be kept under full control, different types of output filter chokes were tried and the operating temperature lowered.
The board was designed for symmetrical AC input and equipped with a rectifier bridge and a total of 2350uF decoupling of each rail. This is seen as insufficient for an amplifier exceeding 100 Watt output power when no regulated power supply is used. The decoupling capacitors were moved to the the rear side of the PCB and increased to 4470uF for each rail. Still not seen as sufficient for an AC-feed high power amplifier, the rectifier was removed and replaced by jumpers such that more energy buffer capacitors can be connected externally. The ceramic 470nF SMD capacitors in the output filter were replaced with two 220nF foil capacitors and an 100nF/1000V SMD ceramic chip capacitor across each set of output terminals. While ceramic capacitors should in general be avoided in the signal path, due to non-linearity and piezoelectric effects, a ceramic chip capacitor without leads offers a very low ESR. Therefore, by including such a ceramic chip capacitor without leads in parallel with good foil capacitors and using a high voltage type chip capacitor, the superior ESR performance is maintained. The non-linearity is then compensated by the larger foil capacitors connected in parallel and by less stress on the ceramic dielectric when only a fraction of the rated voltage is applied.
The same trick with use of high voltage ceramic chip (SMD) capacitors may be practiced where it is not possible to replace a ceramic SMD capacitor with a foil capacitor. Such is often the case for the input coupling capacitors because they may be located beneath the heat-sink for the class D amplifier chip. A high voltage ceramic SMD capacitor is more bulky than an ordinary ceramic SMD capacitor but sufficient space can sometimes be found. In the particular case, 470nF high voltage chip capacitors are so much larger in size that the tiny soldering pads on the PCB would not allow the larger high voltage capacitors to be kept in place and other copper tracks would pass just beneath the capacitor terminals only separated by the thin solder mask. Therefore, the initial input signal coupling capacitors were left unchanged. 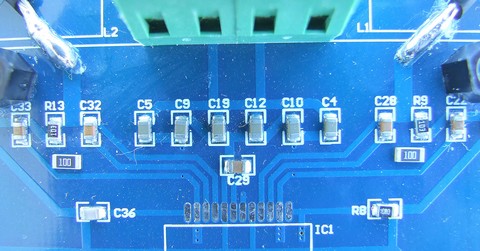 After having prepared the board with the modifications mentioned, a surprise came up - the board did no longer work. Investigation showed that for one of the two chip outputs the high-side switch had shorted to the positive supply rail and the same for the bootstrap terminal of that high-side switch. Why this problem had turned up when the modifications had been done with due care became the question. Check of the components below the heat-sink provided the answer – the snubber circuit was wrongly implemented. The snubber circuit serves to suppress the transient that arise during switching between the low- and high-side power switches such that the energy coupled through the bootstrap capacitor does not stress the drive-circuit. Further, the snubber circuit improves EMI (Electro Magnetic Interference) performance. For the TDA8954 chip a snubber circuit consisting of a 10 Ohm resistor connected to the mid-point of two 220pF capacitors is prescribed in the data-sheet. But, the snubber circuit on this board had been implemented with a 10 KOhm resistor (marking “ 103”) connected to the mid-point of two SMD capacitors. The 10 KOhm resistor (should be 10 Ohm) does not allow the energy in the leakage inductance to be consumed (damped) and the transient is passed on to the drive circuit through the bootstrap capacitor. In the end, the drive circuit may be damaged and the switch permanently short-circuited.
It was necessary to replace the TDA8954 chip which is possible with a (very) steady hand.
Further, as a matter of precaution, the outputs were equipped with catch-diodes, reverse to the two supply rails, in the form of Schottky diodes. Such is recommended for the TDA7498E chip and can in general be recommended as extra protection on top of a snubber circuit. 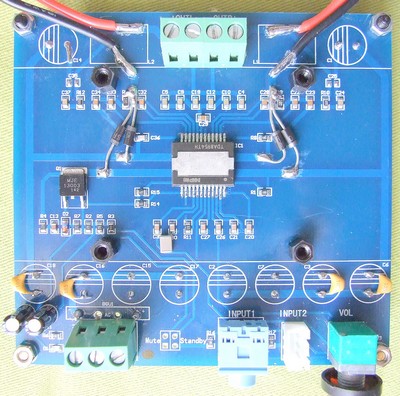 With a new TDA8954 chip inserted the circuit worked again. The testing could be continued.
Using the new L-shaped heat-sink the temperature did not exceed lukewarm. The TDA8954 sound leaves the impression of having a lot of power reserves in particular for control of the bass. Without a reference amplifier used for comparison, the TDA8954 sounded flawless. No disturbing hiss. A clear and undistorted midrange and a bass with good "punch". Amplifier boards based on the TDA8954 chip are particularly suited for replacement of elder class AB amplifier boards where a symmetrical power supply is used as it is normally the case for audio gear from years back.
High quality boards with the TDA8954 have been noticed in advertisements such that little or no modification is recommended.
It is a chip with a lot of potential. For own constructions you may consider the DBS23P DIL version. 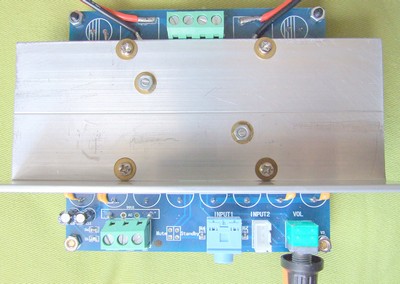 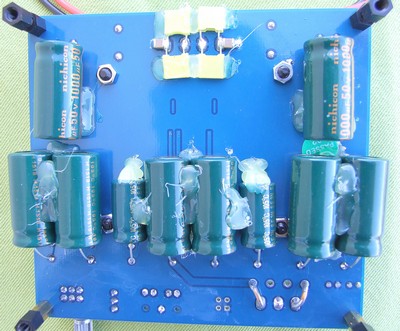 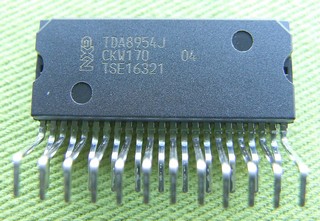