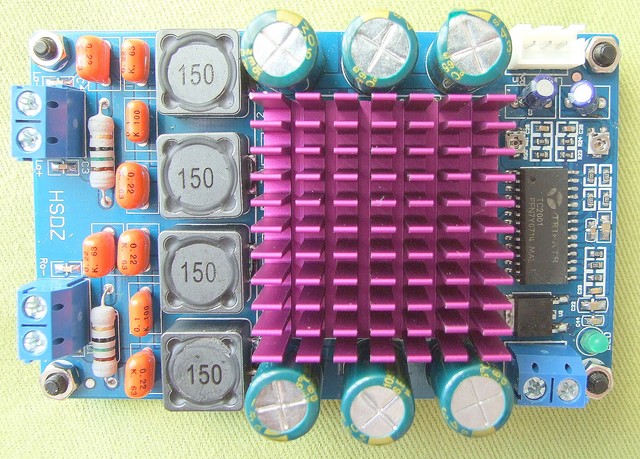 For a start, the chip-set advertised and the chip-set actually used need to be explained.
The board tested here was advertised as using the TK2050 chip-set. The signal processor (modulator} and the power switch bridge are divided in two chips. TK2050 means the combination of the TC2000 (Tripath) signal processor and the TP2050 (Tripath) power switch bridge. The impressive THD+N specification for this combination is 0.007% (8 Ohm).
A first inspection of the board showed that the signal processor is the TC2001 chip, also from Tripath, and not the TC2000. TC2001 is actually pin-compatible with the TC2000 chip and can replace the TC2000 "without change in performance". So, no big thing.
The power switch bridge is hidden below a heat-sink that is glued onto the bridge housing so it is impossible to see the type of the chip. Only because thermal problems were encountered and the heat-sink had to be replaced, the power switch bridge was found to be a STA505 from STMicroelectronics. Thus, not a TP2050 chip and not even a Tripath product. Whereas the actual chip-set performs well, the specifications for this "TK2050" cannot be relied on. The second set of key specs listed above relate to the STA505 chip but no THD+N value is stated for the combination with TC2001. However, the STA505 is very similar to the STA508, also from STMicroelectronics. The combination of TC2001 and STA508 is known from other amplifier boards and may serve as an indication of performance.

The board is based on a signal processor chip from the legendary company Tripath. Tripath owner Dr. Adya Tripathi did a huge effort around the change of millennium in bringing the class D amplifier to audiophile levels. The class T operation was invented which seems to be PWM (Pulse With Modulation) with PFM (Pulse Frequency Modulation) elements. Chips like TA2020 and TA2024 were widely appreciated and offered low THD levels. Tripath went bankrupt in 2007 and though official production is difficult to trace some Tripath chips still seem to be manufactured in Asia. The marking "KOREA" is sometimes seen. 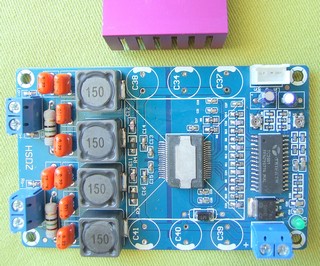 The board has an elegant outline with power-line decoupling capacitors on each side of the purple heat-sink. At the input, electrolytic capacitors of 2.2uF are used for signal coupling. At the output, the filter is designed with 15uH inductors, handling some 3-4 Amps before saturation, and foil capacitors. The input capacitors should preferably have been foil capacitors but 2.2uF foil capacitors are rather bulky.

The TC2001 chip is the class T (PWM / frequency) modulator and the STA505 chip is the push-pull full-bridge with protection facilities. The THD specifications are not known for this chip combination but in test the board sounds really good. No excessive hiss and an undistorted, full-range sound. The board leaves only one important disadvantage - the operating temperature.

TC2001 has a quiescent current of typically 45mA (from 5V) and operates at a frequency around 650KHz. STA505 contributes with 80mA of quiescent current (had it operated at 384KHz) without LC output filters. With the higher operating frequency of around 650KHz and LC filters at the outputs, the resulting quiescent current for the STA505 (when switching at 650KHz) is likely to be in the order of 125mA, such as for the TP2050.
With a quiescent current of 125mA, 4 Watt is dissipated in the rather small chip. On top of that, power losses in the full-bridge transistors will add to heating of the STA505. With a 24V source, about 60 degrees Celsius were measured on the heat-sink in idle mode. The board should be able to be used near its full potential at 36V. Then the idle losses are some 6 watt. Assuming about 8 % power losses in the bridge transistors and with two channels operating, up to a further 5 watt may be lost in the bridge transistors. It is not a surprise that the heat-sink may be hot. So hot that it is unpleasant. If the module is enclosed in a casing, the air-flow around the heat-sink may be hampered and even higher temperatures are the result. The supply-line decoupling capacitors are located next to the hot heat-sink and will be heated as well. Electrolytic capacitors should not be heated for reliability reasons. The thermal problems at the module are important but also the only major deficiency. 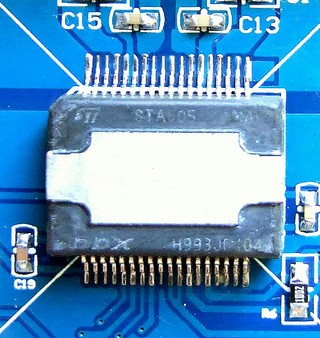 The six 470uF electrolytic capacitors, elegantly arranged next to the heat-sink, are hardly sufficient to decouple a 2x45W amplifier without a further energy buffer. Such a buffer may be external of the board or obtained by replacing the existing 470uF capacitors with larger ones on the rear side of the PCB. High capacitance electrolytic capacitors are expensive and bulky and are often reduced to a minimum in order to offer a cheaper and more compact board - but also less performing.

In general, cooling of class D amplifiers is often an underestimated problem where it is assumed, a priori, that no heating problem exists. Class D amplifier chips may have important quiescent current consumptions that are dissipated in a small SMD-type housings. Hence, cooling is necessary but difficult with the small housings. One of the very few chips that are put in a housing intended for cooling is the Tripath TA2022, but that chip is rarely used today because it requires a symmetrical supply voltage. Another is the Tripath TA2020-020 which is limited in output power and can only be used with a supply up to 13.5V. For higher power levels only the TDA8954 is known to be supplied in a DBS23P package (DIL type) as alternative to an HSOP24 SMD version.

In conclusion, the TC2001/STA505 board offers attractive sound known from Tripath amplifiers but unfortunately also a heating that is difficult to handle. 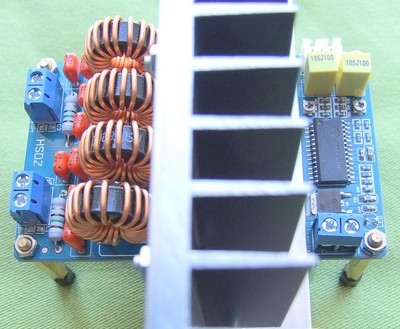 Irritated by a heating that can barely be handled by the default heat-sink but tempted by a sound that is reputed among the best for ordinary switching amplifier chip-sets, an attempt of improvement was finally made.
It required, as an essential step, replacement of the default heat-sink. This was a difficult and delicate operation because the default heat-sink was solidly glued to the chip housing with thermally conductive glue.
First, it was necessary to remove the six 470uF supply-line decoupling capacitors on each side of the heat-sink. Then, it could be seen that the heat-sink was only held in place by some white compound on top of the STA505. The trick when removing the heat-sink from the STA505 was to apply exclusively a separating force between the top of the chip housing and the heat-sink. If a separating force is applied between the PCB and the heat-sink, the small PCB copper pads holding the STA505 are likely to be pulled off the substrate and the board is ruined.
A surgical scalpel was carefully and repeatedly forced in-between the top the the STA505 and the heat-sink at each of the four corners. It probably took some 20 minutes, with doubt about possible success, before the glue gave in and the heat-sink was lifted off. The glue could then be removed with a wooden toothpick. Then it showed that the chip was a STA505 and not a TP2050.
The 15uH output filter chokes were considered marginal for an amplifier that may operate with peak currents around 4A. 4A would probably drive the coils into saturation or at least force a very non-linear operation. The initial coils were replaced with 15uH 10A toroidal chokes. The four 1nF SMD capacitors on each side of the output terminals were removed and replaced by two 100nF/1000V SMD chip-capacitors across the output terminals. Use of ceramic X7R capacitors with a 1000V rating reduces the non-linearity in operation.
The two 2.2uF electrolytic coupling capacitors at the input were replaced with two times two 1uF foil capacitors in parallel (effectively two times 2uF). Two on the top of the PCB and two on the rear side.
New supply-line decoupling capacitors were arranged on the opposite side of the PCB. Four 4700uF/35V (totally almost 19000uF) capacitors with low ESR would just enter the PCB mounting holes, the 50V version could not.
Some components were mechanically stabilized with hot-melt glue.
A new heat-sink was made by an "L"-shaped aluminum profile, a "U"-profile put on the opposite side of the PCB to hold the "L"-profile in place and a piece of old heat-sink fixed to the "L"-shaped profile. It was exaggerated in size but better be safe than sorry after the difficulties with the initial heat-sink. Thermal grease was used between the STA505 and the new heat-sink, no glue! 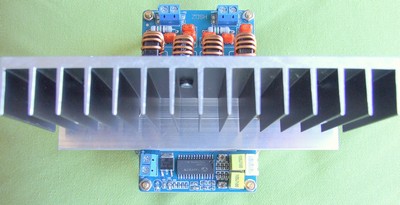 The result is not particularly pretty and much more bulky than the original board. Six long legs support the modified board. But, it effectively solve the initial problems. The board can now be used with a 32V supply without any thermal problems or saturation in the output filter. And, the sound is really as good as expected with a Tripath modulator. The modifications were quite difficult but worth the effort in the end, even if it is not a genuine Tripath amplifier.
It is not a board that seems suited, in its initial form, to be enclosed in a small casing and operated from an external power adapter. 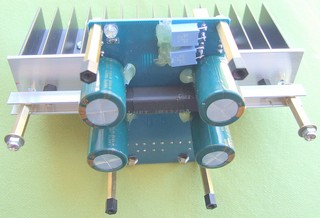