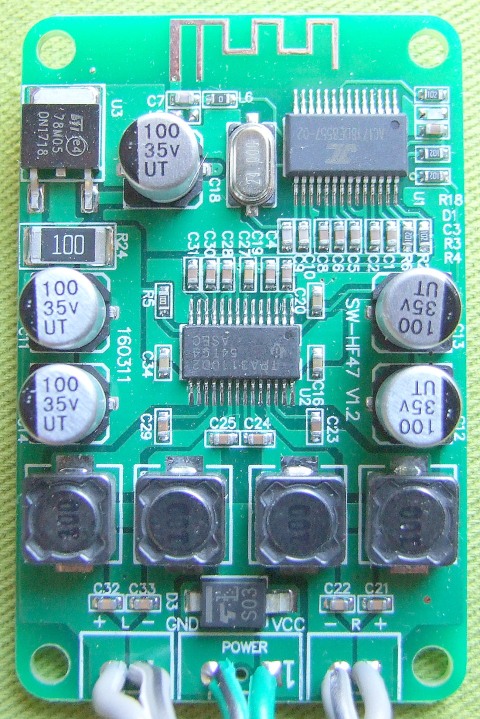 TPA3110 seems to be a down-scaled version of the TPA3116/3118/3130 family chip. Many specifications for the TPA3110 seem quite similar to those for the family chip. The TPA3110 is rated for less output power such that the bridge FET's have a higher impedance and no heat-sink is foreseen.
A sound similar to that of the TPA3116/3118/3130 family was expected and this impression was confirmed. A sound without obvious flaws, in our subjective opinion, and even with a solid bass.

The TPA3110 is specified to accept a 26V supply voltage. But, the maximum output power in 8 Ohm is specified at a supply voltage of 16V. Thus, it hints that at 26V the chip will have trouble with either output current (even in 8 Ohm) or cooling.

The TPA3110 was procured both in a basis-module (with only the basic components) and in a small board with a Bluetooth audio receiver included.
The amplifier board with Bluetooth on-board is small in physical size. The tiny output filter chokes leaves the impression of being marginal for the output power stated in the data-sheet. But, at moderate power levels it actually works.

The advantage of buying an amplifier board that includes Bluetooth is that it only requires a minimum of effort to set up an amplifier for the music on your smart phone. A disadvantage is that you are pretty much bound by the concept on the board: little modification is worth considering as the Bluetooth circuit is probably the limiting factor. For the (cheap) board chosen, the sound was fine with MP3 music.

One irritating feature of the Bluetooth implementation is that, as a gimmick, a female voice tells, in an absolutely not native English, when the Bluetooth connection has been established or broken. While it is a good idea to use quick sounds such as "beeep's" to inform the user about connection / disconnection a human voice is less pleasant. You start thinking what is going on and what is being said? At least we were not impressed.

Apart from that weird gimmick, the performance of the board was satisfactory. Actually, in order better to exploit the potential of the TPA3110 chip, an external output filter was connected without seeking the limits of the initial on-board output filter.

For the little money you get quite a lot. 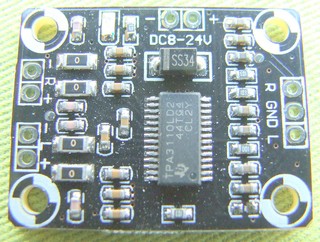 A small stereo amplifier was made from a basis-module with only the essential components included. The basis-module had neither an output filter nor power line decoupling capacitors of any important size.

In the output filter four closed 22uH chokes, that can probably handle some 2 Ampere, were used. These chokes had been recuperated from small TDA8932 boards where they were found clearly insufficient. For the TPA3110 the chokes are on the limit. As this small stereo amplifier was made mainly with the purpose of testing the TPA3110 chip, independent of an ordinary Bluetooth source, 2 Ampere was found sufficient. 1uF foil capacitors were chosen as filter capacitors which, with the 22uH chokes, leave a cut-off frequency of 34KHz.

Apart from small ceramic chip capacitors, that are probably needed to keep the TPA3110 stable, no power line decoupling capacitors were included on the basis-module. For 15 Watt stereo, a total of 7000uF electrolytic capacitors were added at the power terminals of the module. The basis-module was delivered with a protection diode ensuring that only correct polarization of the supply voltage would be applied to the chip. A bypass of this diode was implemented because it left the impression of improving bass performance. This seems logical as a power amplifier circuit having no charge buffer and only being supplied through a diode is likely to be short of energy for transients. 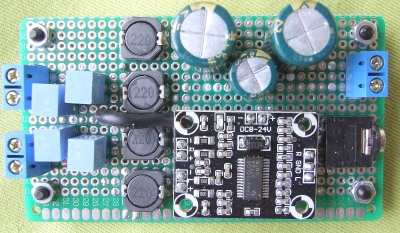 Actually, two TPA3110 basis-modules were tested because the first module was damaged during test. The first module seemed less performing than the second in the sense that the second module seems to have a better deep bass performance and becomes less hot than the first.
The first basis-module, equipped with an output filter and power line decoupling capacitors, was for a start tried out with a 12V supply voltage. The sound was good but characterized by a somewhat low-keyed deep bass. At 12V supply the chip and chokes hardly became lukewarm. The supply voltage was increased to 19V. With 19V supply, the chokes got to just below 50 degrees Celsius which is still acceptable. Worse was for the tiny TPA3110 chip without heat-sink. It became so hot that it was unpleasant to touch the housing. Non-contact measurements showed around 50 degrees Celsius but the chip housing felt even warmer. Therefore, a contact thermometer was put on the top of the chip housing in order to get a second measurement. For a short moment the metallic temperature probe slided off the top of the chip housing and got in electrical contact with more of the tiny IC leads. As the result, the first chip was permanently damaged and the whole basis-module was changed to the second one. 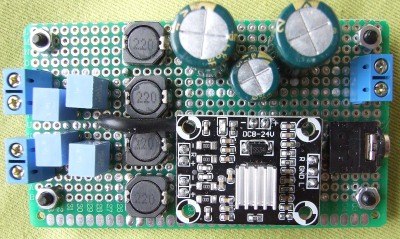 It appears that the second basis-module has a more prominent deep bass than the first module though still not with the same "punch" as for the more powerful TPA3116/TPA3118 boards. But, for the size of the chip and the module it is convincing.
More important than the improved bass is the heating. Even with a 19V supply, both the TPA3110 chip and the chokes become no more than lukewarm with a good sound level in the loudspeakers. It is suggested to use a supply voltage up to 19V. A 24V supply is likely to cause stressful temperatures. If more power is needed, use the TPA3116 or TPA3118 instead.
It is difficult to improve the cooling of the tiny TPA3110 chip as only a very small heat-sink can be placed on top of the housing.

Sound-wise the TPA3110 chip appears very similar to the TPA3116/TPA3118, apart from the less powerful deep bas. An undistorted sound and no disturbing hiss. As for the TPA3110 board with Bluetooth, very good values for the DC offset at the outputs were measured: 2mV and 4mV.

Though the TPA3110 got well off in the first tests it is not suggested to base a home amplifier on this chip. Primarily because the moderate extra cost of using TPA3116 or TPA3118 boards instead is found a good investment. The two more powerful TPA3116/TPA3118 leave an increased output power, more "punch" in the bass and better thermal margins.
It is, however, interesting to investigate the potential of the TPA3110 chip in case it is found in products of interest. Such as the Bluetooth board briefly tested here. The TPA3110 is a chip that absolutely has its merits in low cost audio products. For DIY use it may be implemented where a more simple audio output is required.