TPA3116D2 - Versatile chip with fine sound and applicable for a wide range of supply voltages. 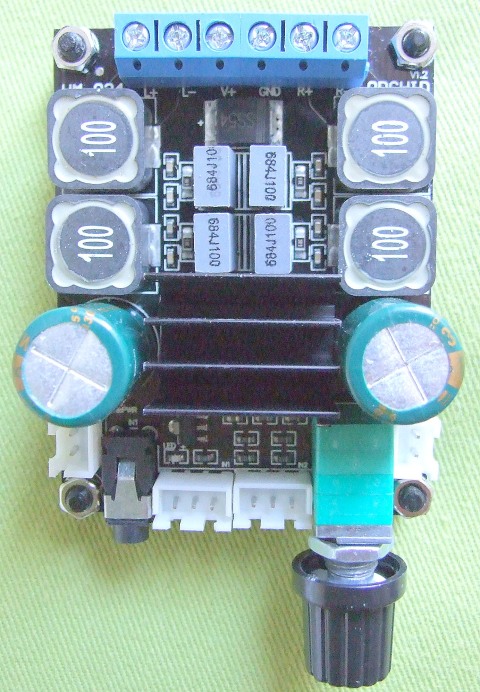 The TPA3116D2 is a versatile class D chip with fine performance to be used at low and medium power levels. It is the most powerful of a family including the TPA3118 and TPA3130 class D chips. Physically it is a rather small SMD housing (TSSOP) with a small metallic cooling pad on top of the package for a heat-sink. The TPA3116D2 has its output power limits from a maximum supply voltage of 26 Volt. Downwards it is specified to operate below 5 Volt. But, for low voltage operation the TPA3130 or TPA3118 may be better choices as cooling is not an issue. 120mOhm (typ.) bridge switches is serious design.

The TPA3116D2 was tested in a low cost board that nevertheless was quite complete in its implementation. The 10uH output filter chokes are of a type that can probably handle some 4-5 Ampere peak before saturation. This is just sufficient. The output filter capacitors are of the foil type with a value of 680nF. Ordinary ceramic SMD capacitors are used at the input for coupling of the signal. They should rightfully be replaced by foil capacitors with better linearity but they are very difficult to change the way they are located. Two 1000uF/35V low impedance electrolytic capacitors are included for decoupling of the power supply line. The TPA3116D2 chip is cooled by a heat-sink that appears to be glued to the chip housing and makes DIY experiments difficult.
All in all, a reasonable implementation if the board will be used "as is".

Before initial test it was nevertheless decided to replace the output filter capacitors with 1uF foil capacitors in order to lower the cut-off frequency a little. The power supply line decoupling capacitors were increased with two 2200uf/35V capacitors connected in parallel and arranged on the opposite side of the PCB. In total that leaves good 6000uF of decoupling. Finally, a small problem that was noticed during initial testing was solved: noticeable "hiss" in the speakers if the volume potentiometer was put near a mid-position, thus, if the amplifier input looked into an impedance of more than 10 KOhm. It is known that an amplifier with an input being feed from a high impedance circuit may generate hiss. The volume potentiometer was measured to be of a 50 KOhm type. 50 KOhm is a rather high impedance considering that modern pre-amplifiers normally use OP-AMP's that can handle low impedances at the output - often 600 Ohm. So, no need existed for use of a 50KOhm potentiometer. But, the potentiometer included a power switch function and would be very difficult to replace without risk of damage to the PCB tracks. Therefore, two 4.7 Kohm resistors were mounted between the amplifier input and ground, below the potentiometer, such that the impedance seen from the amplifier input would remain below 4.7 KOhm. That solved the hiss problem but changed the behavior from the potentiometer somewhat. However, the pre-amplifier feeding the TPA3116D2 board had another volume control. 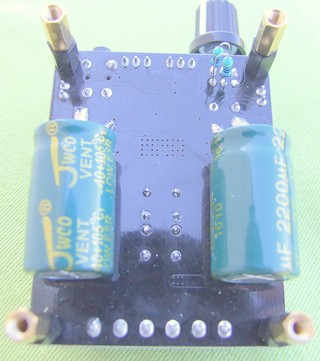 The sound of the TDA3116D2 amplifier was without obvious flaws. A clear and undistorted sound with good control of the low bass. The amplifier board was absolutely pleasant in use. The heat-sink raised in temperature but nothing unacceptable. For the price, particularly on sale, the board is a bargain. From a 19 Volt or 24V supply the board has fully sufficient power for ordinary listening.

The TPA3116D2 chip is also supplied in a small module with only the essential components mounted around the chip, using SMD technology. It is then possible for a DIY enthusiast to choose the critical components as preferred and implement optimized cooling. 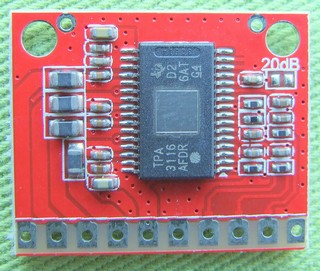