YDA138(E) - A favorite among low power amplifiers with convincing sound. 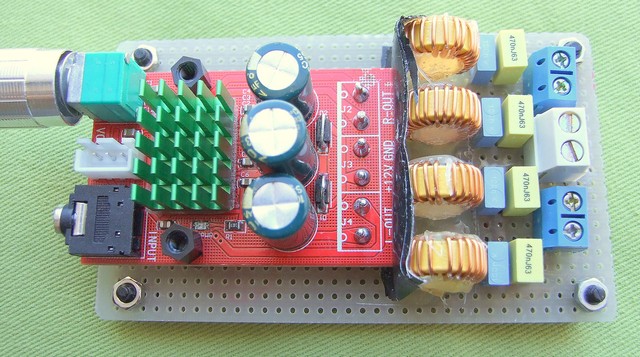 YDA138 is somewhat atypical because it is marketed by a company with extended experience on sound generation (Yamaha) that only supplies few single-chip class D amplifiers on the market. The YDA138 tested here is rather easy to get your hands on while other Yamaha chips, the YDA147 and YDA148, are more rare. The performance of YDA147 (48 pins) and YDA148 (32 pins) is very similar but YDA147 is designed to handle 4 Ohm loads while YDA148 is intended for 8 Ohm loudspeakers. The YDA138 is housed in a reasonably big sized package (SSOP42) with terminals on two opposite sides. The slightly more powerful YDA147/148 are supplied in tiny squared packages with terminals on all four sides. The YDA147/148 have got moderately better specifications than the YDA138 and could be interesting for DIY purposes. But, few boards with the YDA147/148 are found and one available (YDA148) does not easily allow a heat-sink to be placed on the chip. A test of that YDA148 board is found on the Internet and the chip (without heat-sink) became hot - so hot that it was unpleasant to touch. This YDA148 board is not seen as suited for experimental DIY purposes. The YDA138 can easily be found in boards and at a much lower price than for the YDA147/148. Also, comparing the data-sheet figures showing the THD vs. frequency indicate rather similar distortion performance. Therefore, only YDA138 boards are considered here.

The YDA138 boards tried out are among the least expensive. The board with a single YDA138 does not even include an LC output filter, which is described in the data-sheet as not mandatory.

Starting with the best quality of the YDA138 - it just sounds fine. Clear and undistorted sound with moderate deep bass. With or without an LC output filter. No disturbing hiss. The board with double YDA138 appears, not surprisingly, to have a bit more "punch" in the bass. As an amplifier with 2x8W output it is sufficient for normal home amplifier use. Actually, also for the car. Further, with a quiescent current of 40mA only half a watt is dissipated in the chip at 13V supply. So, it can be used without a heat-sink. For those still concerned about the operating temperature a small heat-sink can be glued on top of the YDA138 or fixed using two holes in the PCB.
The 13.5V supply voltage maximum is an inherent and intended limitation of the chip. With an 8 Ohm load it leaves up to 10 Watt output power from each channel. This output power may be doubled by use of 4 Ohm loads but then the board with two YDA138 chips, each with paralleled outputs, should be chosen. The YDA138 appears designed for 8 Ohm loads but the two outputs may be connected in parallel to handle 4 Ohm loads. 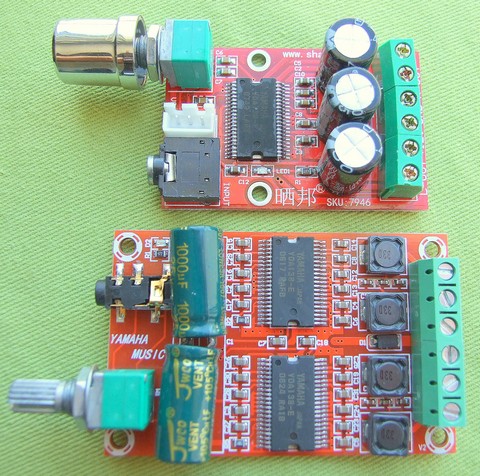 It seems disproportionate that in the board with double YDA138 chips very tiny 33uH chokes are used in the output filter. With a 4 ohm load close to 2 Ampere RMS may be delivered to the loudspeakers. Thus, almost 3 Ampere peak. It seems very likely that the chokes will saturate with such a current. Though the data-sheet describes the option of operation without output filter, the data-sheet also mentions appropriate values should an output filter be preferred. For 4 Ohm loudspeaker impedance chokes of 10uH should be used. For 8 Ohm the recommendation is 22uH. 33uH corresponds to even higher loudspeaker impedances (12 Ohm). But, the double chip version with paralleled outputs has an increased current capability and is intended for 4 Ohm loudspeakers.
The tiny 33uH chokes were replaced with 10uH chokes, having a rating of some 4 Ampere, and performed well with filter capacitors of 470nF.

For DIY purposes with modification of the board, it is less suited. This is because the copper tracks on the board are not very wide and the ground plane is of the mesh type. Thus, it is difficult to change much on the board itself. It is recommended mainly to use the board "as is", eventually with an LC output filter connected to the output terminals. The board is equipped with 3x470uF of energy storage for decoupling of the power supply line. This may be increased with 4700uF external of the board.
For the money you get a surprisingly good sound.

The YDA138 was finally implemented with an external output filter. Chokes of 22uH/5A were used and the cut-off frequency set around 40KHz using 680uF filter capacitors. This configuration will be tested further.